The story begins with some Guy Mainak from Kolkata. He contacts me through my Google+ Profile for a business proposal he wants to share with me.

Usually, I am open to meeting people, but as it is April time, I become a lot busier with my taxation and other non-technical stuff. So I couldn’t meet him. I thought the best option could be to meet him at my home on the weekend, but that did not work either.

Suddenly after I ask him about his blog or about page where I can read more about him, he says

have you understood my proposal

And that shook me off. 9 minutes ago he said this

I will send my propsal on Monday. After that we can proceed

The proposal that he will send a few days later and he is still expecting that I know it already. But things like those can happen in a chat, and so we ended the conversation with a note that he would send me the proposal on Monday.

Five days later i.e., on Wednesday, he pings me, and this is the conversation. You may fall off your chair, reading it. 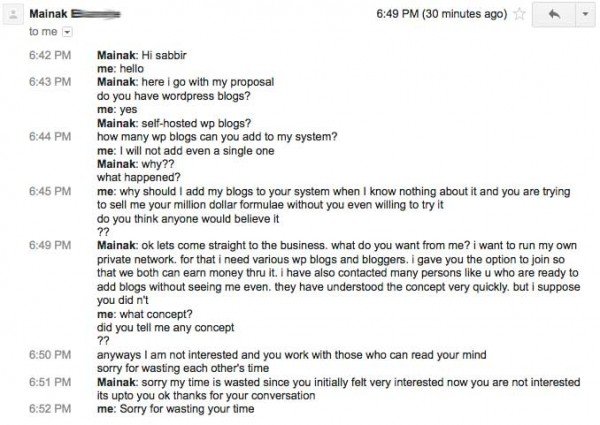 here i go with my proposal

And the next line

do you have wordpress blogs?

He probably forgot yet again that he had a glanced over my blog’s about page, which is a WordPress blog. Again these things can happen because five days have passed. The next statement made me go mad at him.

how many wp blogs can you add to my system?

I know nothing about the system. What it is, where it is, and how it works, and so I said NO. But then he assumed that I know how to read his mind.

He said people are ready to add blogs to his system without meeting him, and we know what type of blogs he is talking about. Though I could not understand his idea, I can sense it was something inline with some blog networks to make money from it.

Also read:
Proposal Email Template With Sample to Win New Clients
My proposal email template is an introduction opportunity, highlight of expertise & questionnaire to show why I’m the best person for the job

Moral of the Story

If you have a business proposal for anybody, make sure you have a proposal that isn’t to laugh at and conveys what you have in mind before asking someone to be part of it. Or else it could be on the left for others to laugh at in some blog articles.

Blogging Since 2009. If I can leave my high paying C# job in an MNC in the midst of global financial crisis of 2008, anybody can do it. @BizTips I guide programmers and developers to Start and Grow an Online Business. Read more about me here.

Blogging Since 2009. If I can leave my high paying C# job in an MNC in the midst of global financial crisis of 2008, anybody can do it. @BizTips I guide programmers and developers to Start and Grow an Online Business.

Get in touch with me on LinkedIn or read more about me here.

Let me Guide You to Start and Grow your Online Business

This website uses cookies to improve your experience while you navigate through the website. Out of these cookies, the cookies that are categorized as necessary are stored on your browser as they are essential for the working of basic functionalities of the website. We also use third-party cookies that help us analyze and understand how you use this website. These cookies will be stored in your browser only with your consent. You also have the option to opt-out of these cookies. But opting out of some of these cookies may have an effect on your browsing experience.
Necessary Always Enabled
Necessary cookies are absolutely essential for the website to function properly. This category only includes cookies that ensures basic functionalities and security features of the website. These cookies do not store any personal information.
Non-necessary
Any cookies that may not be particularly necessary for the website to function and is used specifically to collect user personal data via analytics, ads, other embedded contents are termed as non-necessary cookies. It is mandatory to procure user consent prior to running these cookies on your website.
SAVE & ACCEPT