Comments are your reader’s voice and just because your blog is getting too many spam does not mean you should turn off comments completely.

WordPress comment spam is ever increasing and BizTips was no exception. The spam was at a point where I had to give comments options lot of thoughts. I was used to seeing almost 3000+ comments spam every morning. 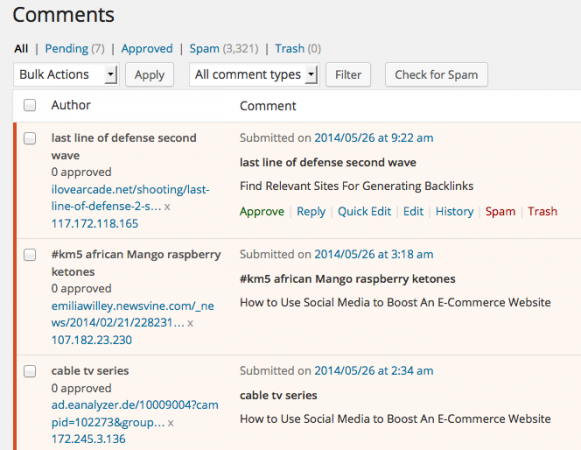 Note: Normally I never publish IP addresses of user but than above screenshot is of spammer and it is ok to reveal their identity.

As I started to look for solution to the issue, I found that it is wise to opt to silently discard the worst and most pervasive spam option in Akismet and I was skeptical about using it but then I was left with no choice with the amount of spam. The reason for I was skeptical about using it was because I knew that Akismet at times flags genuine comments as spam also. 99.93% of accuracy of Akismet looks Awesomely good but then if I look at the numbers that matter more to me; I have 4500+ comments on BizTips all posts combined and 270 of them were flagged as spam wrongly by Akismet and it is handsomely large chunk of all the comments – roughly ~6%. So I cannot rely completely on Akismet to weed out spam for the blog comments.

With 3k+ comments in my Spam queue every morning, I was not able to go through them and un-spam the genuine comments that I used to be doing earlier when comments spam was not at these levels.

Why I Prefer Allowing Comments

Akismet and WordPress comments are not working and one of the easier solutions is to stop allowing comments and it is one of the majorly accepted solutions by many of the well-established bloggers. To fight comments spam either disable comments completely or at least disable comments on older posts. CopyBlogger recently closed his blog for comments and Problogger don’t allow comments on older posts but I did not liked the idea of not allowing users to comments at all or even on after certain period of time.

So if I disable the comments and if some user wants to know more about any topic, he will either look for further information on Google or may use my contact form (at least that is what I can think off). In first case I may just loose one of the readers of my blog and in second case I will have no idea about what all articles he has already read on my blog and then he may be asking those question and so I may just sound stupid asking him to read those articles on the same topic which he has gone through before putting his question to me.

Time and again I have seen users not only use my article but also the comments and my replies to those comments to help themselves for clarifications and once they could not find the answer, they prefer commenting further.

Since the inception BizTips is a very intelligent community and Thanks to everyone for being so intelligent and understanding.

On top of that I am not a blogger who blog daily and I prefer keeping my posts weekly or biweekly but quality of content is that is evergreen and don’t become stale very easily and so not allowing comments on old articles was not an option that I was actively looking for.

Why I Opted for Third Party Commenting Options

BizTips community is very interacting and if one of the methods of interaction fails, they always opt for other method of communication. I started getting emails where users reported that they are not able to comment on my blog and am being blocked out.

So it was high time to move on with WordPress’s inbuilt comments and Akismet.

As I read about the plugins to block spam, the only doubt I had in my mind was about genuine comments being blocked out and so I was not very willing to try yet another spam blocking options. So it was high time that I opt for better commenting options for BizTips and this is when I read Pat Flynn On Blog Comments Options

I Opted for Disqus After Testing Almost Every Possible Option

After reading Pat Flynn’s views and benefits of third party commenting options, I was sure it is the one of the better choice for my blog but still I just did not wanted to weed out all the other options unless I had solid reasons to do so.

There were many reasons why I opted out of Facebook comments.

After reading 6 Reasons Why We Switched Away from Livefyre By WPBeginner, I was sure of not using livefyre but as I completed reading the article, saw that they are using Disqus – yet another reason for moving to Disqus.

The next options for me to try were IntenseDebate and disqus.

IntenseDebate was by Automattic the company founded by the founder of WordPress and Disqus being used by the bloggers I follow like Syed Balkhi of WPBeginner and Pat Flynn of SmartPassiveIncome.

Luckily I opted to test Disqus before IntenseDebate and it had everything that I needed.

I wanted to have…

Easily export my existing comments onto the new system as well as be able to move back to old system without loosing anything.  Disqus just moved over my existing comments to their platform with just few clicks. All the future comments from disqus are being synched to WordPress as well. So if I remove disqus at any given point of time, I will not loose a single comment.

As I tested disqus I realized that comments need not be in the order they are posted (Oldest or Newest first) and it can be rated as well. Other users can rate the comments and best-rated comments can be on top that increases the quality of comments that users read first.

I don’t think CopyBlogger or Seth Godin removed comments because they had issues with spam or anything else because those options can always be worked out. What I think is it was more to do with the amount of comments that they had on each article that they could not justify the user’s time to sending them those comments which they could not respond to. There are a limited number of comments an individual can respond to in a day and so they found themselves guilty of not able to respond to users and so instead of wasting users time on allowing comments they opted to put a full stop to it.

Blogging Since 2009. If I can leave my high paying C# job in an MNC in the midst of global financial crisis of 2008, anybody can do it. @BizTips I guide programmers and developers to Start and Grow an Online Business. Read more about me here.

Blogging Since 2009. If I can leave my high paying C# job in an MNC in the midst of global financial crisis of 2008, anybody can do it. @BizTips I guide programmers and developers to Start and Grow an Online Business.

Get in touch with me on LinkedIn or read more about me here.

Let me Guide You to Start and Grow your Online Business

This website uses cookies to improve your experience while you navigate through the website. Out of these cookies, the cookies that are categorized as necessary are stored on your browser as they are essential for the working of basic functionalities of the website. We also use third-party cookies that help us analyze and understand how you use this website. These cookies will be stored in your browser only with your consent. You also have the option to opt-out of these cookies. But opting out of some of these cookies may have an effect on your browsing experience.
Necessary Always Enabled
Necessary cookies are absolutely essential for the website to function properly. This category only includes cookies that ensures basic functionalities and security features of the website. These cookies do not store any personal information.
Non-necessary
Any cookies that may not be particularly necessary for the website to function and is used specifically to collect user personal data via analytics, ads, other embedded contents are termed as non-necessary cookies. It is mandatory to procure user consent prior to running these cookies on your website.
SAVE & ACCEPT